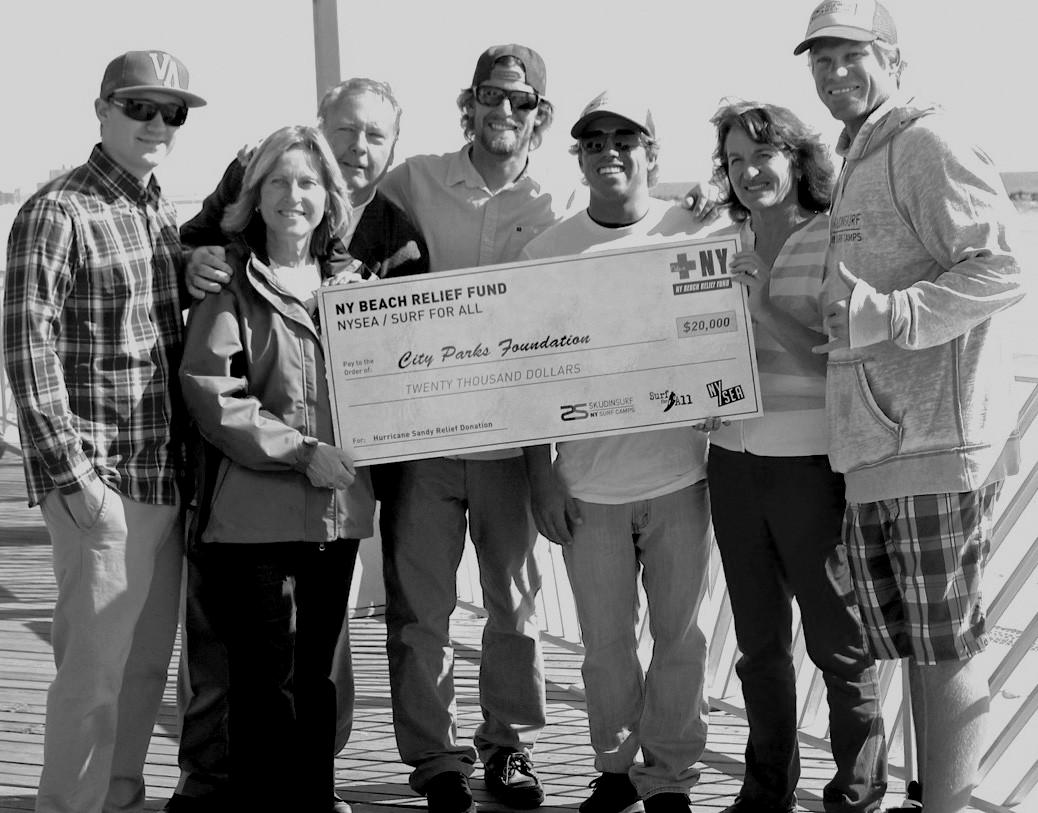 The instructors of Skudin Surf Camp did much more than teach locals how to hang ten this summer. They also gave a generous donation back to the community after holding wildly successful fundraisers for Sandy relief.

Will and Cliff Skudin have operated a surf school on Beach 67th Street for the past five years, along with Rockaway local and former east coast surfing champion, Jeff Anthony, for the past two years. After Hurricane Sandy hit, impacting surf communities around New York, the instructors knew they had to do something to give back to the places they grew up surfing in.

Even though their own homes were destroyed in Long Beach, to the point of having to be demolished, the Skudins dedicated much of their time trying to help beachside communities as a whole get back together. “We wanted to do what we could to help rebuild the communities that gave us our childhood and life,” Will Skudin said.

“In the days after the storm, seeing the places you grew up with and loved so much being taken from you, you go from a sense of mourning to saying, ok, what can I do to get it back?” co-founder of NYSEA, Cliff Skudin said. “We did everything and anything to get the communities that we love so much and the people back.”

The Skudins turned to social media to send out a widespread message. Utilizing their clothing and media company, NYSEA collective, the young men were able to reach across the world to ask for outside help. “The idea behind it was to get outside money into our beach communities,” Skudin said. “We didn’t want to take one brick from one house and put it in another. Our goal was to use our resources to get outside of the state.”

Skudin enlisted the help of web designers and artists, JR Jenson and Frankie Princpie to help create an NY Beach Relief Fund donation website and relief t-shirt design so that the shirts could be sold to raise money for places like Long Beach and Rockaway.

To help make outsiders realize the impact that Hurricane Sandy had in New York, Skudin had the idea of shooting an aerial video. “I knew these people were not going to be able to really see what we went through unless they saw it from above,” Skudin said. NYSEA videographer Etan Blatt took stunning shots of Sandy-devastated surf communities like Long Beach and Rockaway from a helicopter. The video footage was used by dozens of outlets, including during the 12.12.12. relief concert.

The success of the project went beyond what the Skudins could imagine. “We thought we’d raise $10,000 in total,” Will Skudin said. “We raised $10,000 the first day. It really turned into something big and the feedback from the surf community was tremendous.”

Through the project, the guys were able to raise $112,000 from sources in 36 different states and nine different countries. “For a small business like us to be able to have that feedback from the rest of the world was really amazing and really emotional,” Skudin said.

In addition to the funds raised through donations and t-shirt sales, NYSEA was also able to raise money through the Feed Long Beach Thanksgiving fundraiser with the help of Sean and Kelly Sullivan of Swingbelly’s and Billy Kupferman of the Long Beach Surfer’s Association. The band Taking Band Sunday also held a fundraiser for NYSEA at a relief concert in December.

A huge donation went towards the City Parks Foundation to help the Parks Department revitalize Rockaway after Sandy. The Skudins reached out to Jill Weber, the Parks Department administrator for Rockaway, who they’ve partnered with since they opened their surf camp five years ago, and told her that they wanted to give money back to the Rockaways. They made a $20,000 donation which will go back into the beach. “It was an amazing thing they did,” Weber said, adding that she was impressed by how far NYSEA was able to reach. “I didn’t realize the level of outreach they had around the world.”

Some of the donations went toward equipment and regular Park Department operations for the Rockaways, however Weber has more planned for next season, especially around the new surfing hotspot on Beach 67th Street, where the Skudin Surf Camp and other surf schools are based. “We want to do something to enhance the surf beach because it has become more of a happening spot,” Weber said. She discussed the possibility of adding a volleyball net, a shade structure, picnic tables, lockers and more, using some of the donated money, but she also said she’s open to more suggestions.

The Skudins have contributed to the Rockaway surf community for many years by giving lessons and holding surf camps in the summer and they know what they’re doing. As world-recognized and award winning surfers who have ridden some of the biggest waves on earth, the Skudins and the other instructors of the camp bring experience and professionalism into each lesson. “They’re a great organization,” Weber said. “They’re highly qualified and bring a lot to the table.”

The Skudins noted that business was tougher than usual this past summer, but they’re optimistic about for the future as Rockaway makes progress in its recovery from Sandy. “We’re really excited about the 2014 season,” Skudin said. 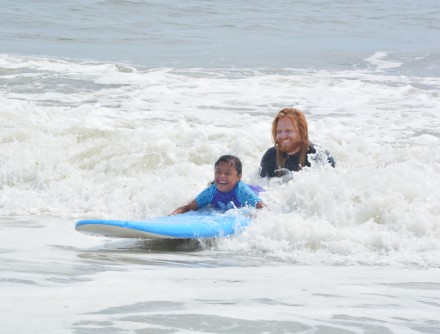 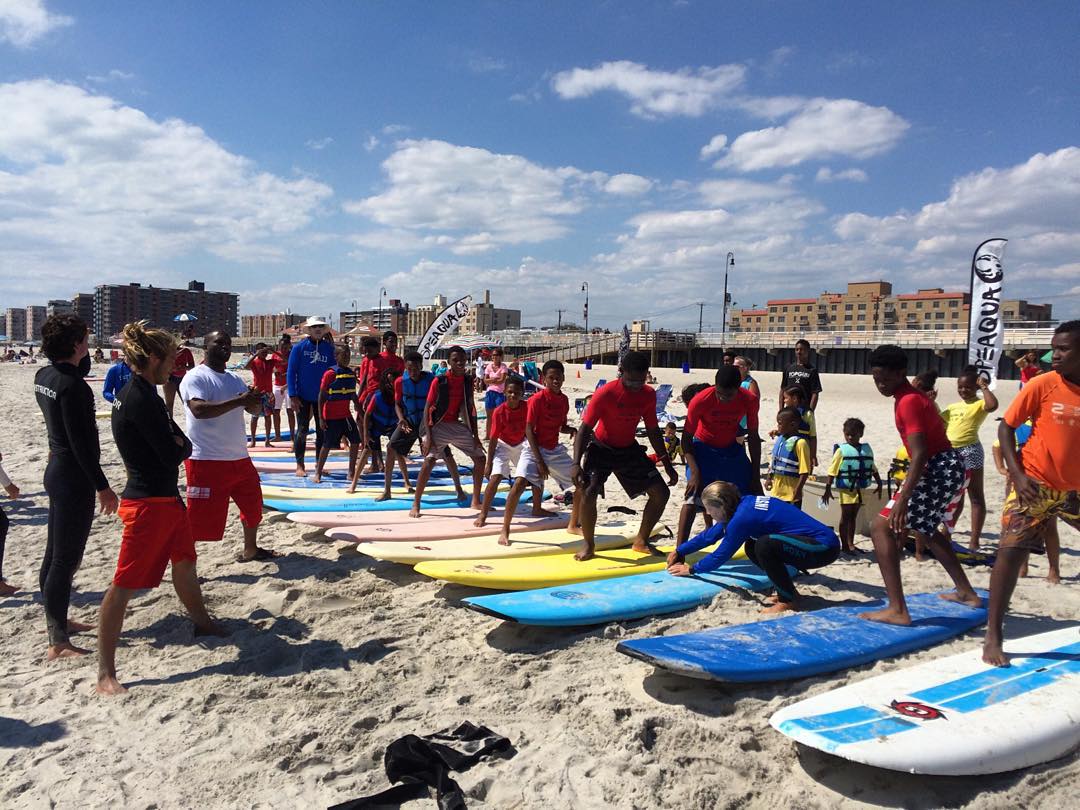